Under the Sidewalk Clock 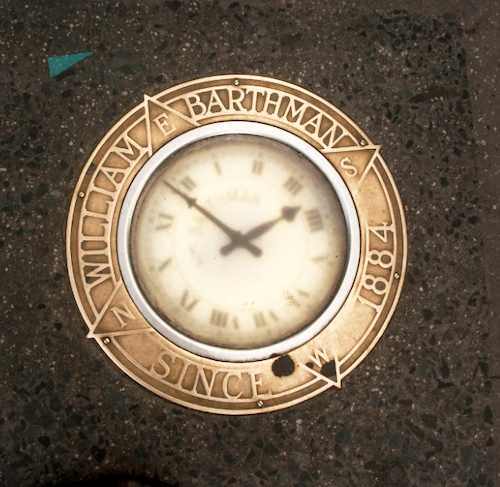 If you’ve never noticed the brass clock embedded in the corner of Broadway and Maiden Lane, you’re one of the many. Still, the clock is pretty well known among those with a thing for the rare and the odd. The company that installed it, Barthman’s, has been around for well over a century (it used to be located right on the corner along with the clock; now it’s a couple of doors north). 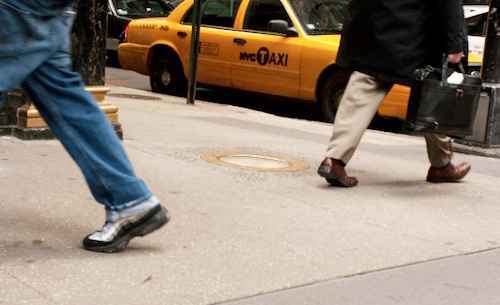 At peak the clock gets walked on more than 15,000 times per hour: they’ve actually counted. And the thing has been telling the correct time more or less continuously since 1899. It nearly took a terminal hit during 9/11—the towers were only blocks away. When I asked manager Connie Swierkowski about it, she said I should talk to Barthman’s bench jeweler Guilo: he’s the one who caulked up the cracks in the sidewalk (see the blue arrow in the pic above) and changed the motor after rainwater seeped through. And he was down in a subterranean workroom, right underneath the clock, when the explosion shook Manhattan.

Subterranean workroom? This is one of the few cities in the world where you can get a pretty clear idea of what happens underground, so I guess I didn’t expect that below the cement corner there was nothing but dirt and skeletons. But for some reason I wanted the clock to be set in, like an urban gemstone. “No,” said Connie, “that’s how we get to it—wind it and repair it and correct the time and everything—from underneath.”

Enter Guilo. He took me through a metal door on Maiden Lane, led me down into the city’s thrumming guts, and once we were in the right spot, completely disassembled the corrugated tin sheeting in the ceiling to show me the backside of a true New York City curiosity. Exclusive. Click for big. 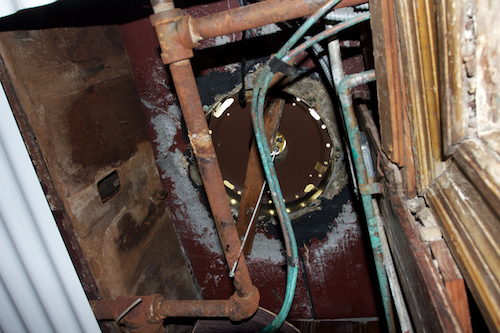