Deep Inside Saint Mary the Virgin

The Church of Saint Mary the Virgin is one of my favorite places to stun a New Yorker: it’s a soaring cathedral hidden among a row of buildings, just fifty yards from Times Square. Don’t treat a visit there as a religious experience—or not unless you want to; I for one would be happy if I never saw another tortured Jesus in my life. Treat it rather as an exercise in amazement.

For drama, take the 47th Street back entrance. It looks like nothing. 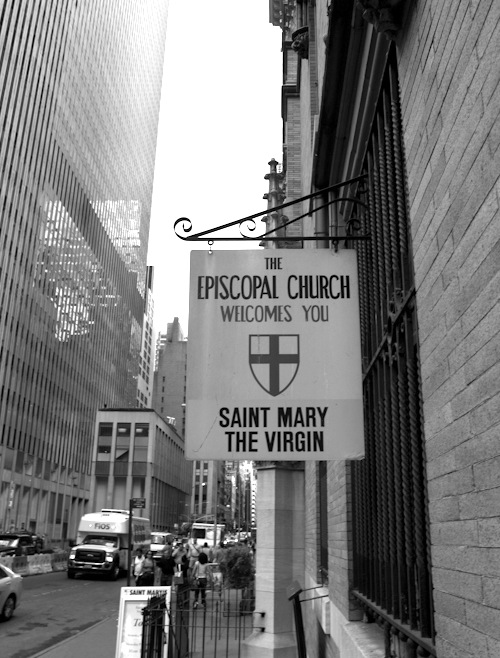 Five steps later you smell incense and bump into a massive pillar. Here’s the straight shot: 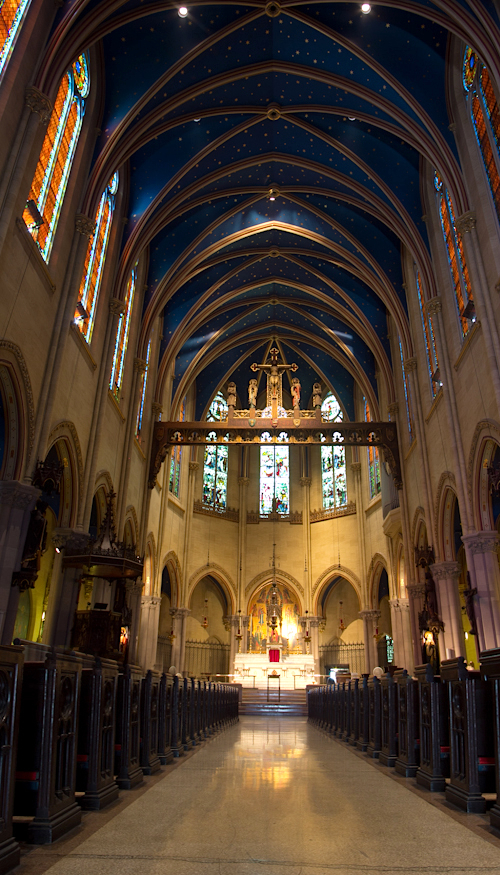 My interest in Saint Mary the Virgin, aside from its amazing camouflage, is the building’s place in architectural history. Saint Mary is a true New York City innovator, the first church in the world built on a metal skeleton. Here it is going up in 1894 (click for big). 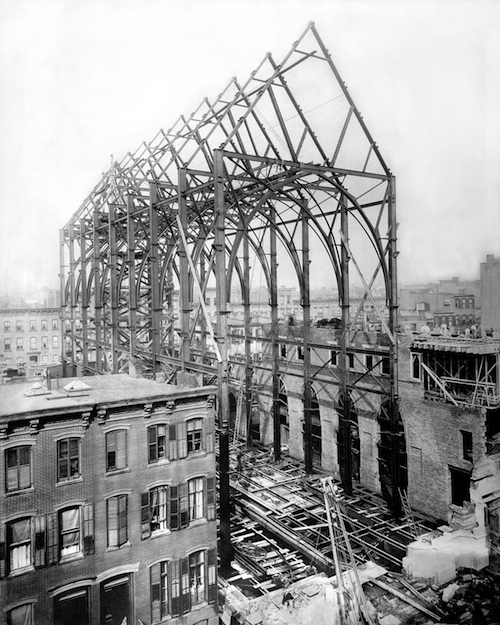 I headed down with a camera and a notebook to see if there was any part of this pioneering metal frame visible to the explorer. I got more than I deserved. On this Secret New York gig, I’m always hoping to luck onto the Right Person: the sharer, the fixer, the door-opener. At Saint Mary’s the janitor told me to go next door and ring the bell of archivist Dick Leitsch. 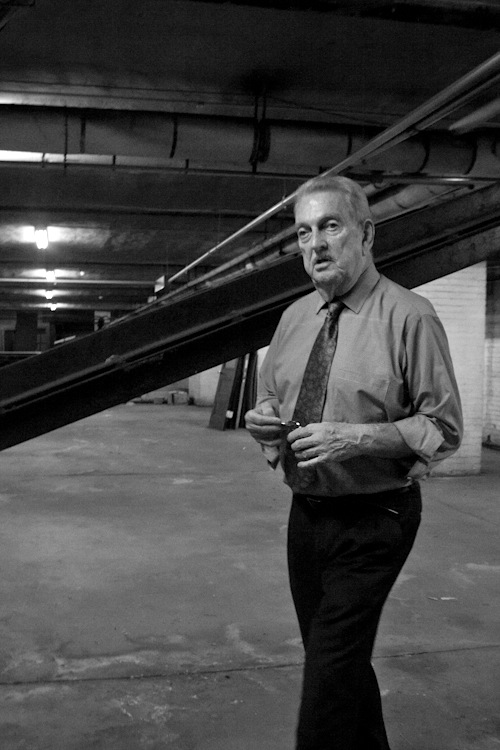 You can’t know what to expect from a man who nests in the cobwebs of an old church; Dick turned out to be a charming Kentuckian with a slow, sly sense of humor and a serene urge to knock my socks off. He trudged back up the stairs to fetch a large ring of keys, and during the next hour turned the place inside out for me.

Here’s the motherlode of metal: the trusswork underneath. “They couldn’t build it with buttresses,” says Dick, “because there were brownstones on either side. So they ended up putting all this bracing under here.” 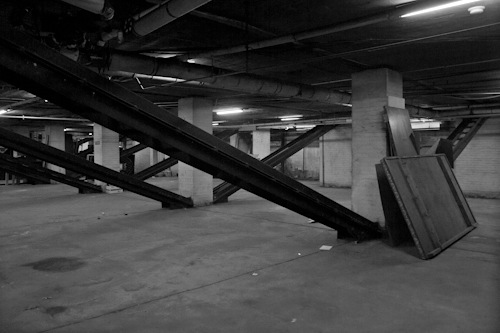 This was still early days for metal structures: nobody at the time knew how much bracing was needed. Dick laughingly sums this arrangement up as “totally overkill. It made the basement basically useless.”

There’s room, though, for a creaky stair leading down to the dark nook where the incense-maker concocts his secret recipes. 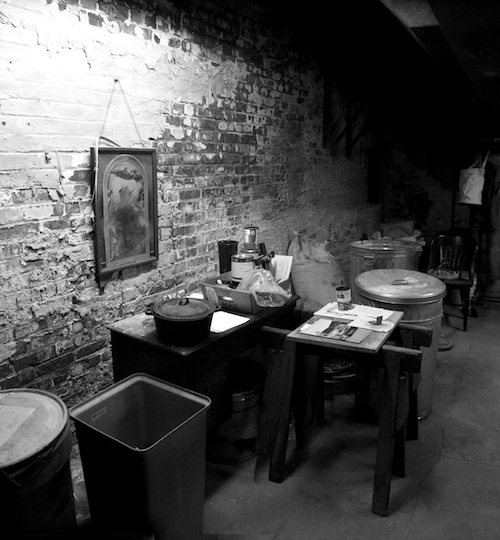 Pressed to imagine what a subterranean incense-maker’s digs would be like, I might have come up with exactly this. I didn’t know yet that Dick was showing me the sanctum sanctorum: Saint Mary the Virgin is famous, as much as Episcopal churches can be famous, for the flavor and volume of incense it uses in service. The place’s nickname is “Smokey Mary.”

Cans and jars of the stuff were lined up in the dust like bottles of rare vintages. 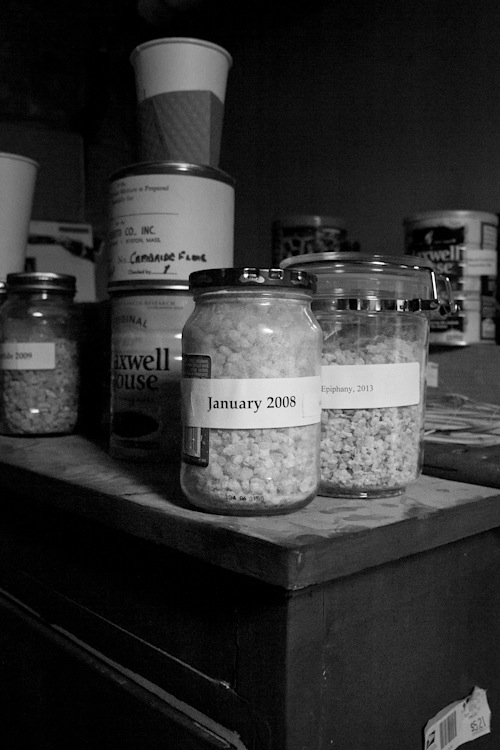 As I was inspecting the weirdness, Dick called down: “Now you are the incense-maker. Forever!” And he quietly locked the door. 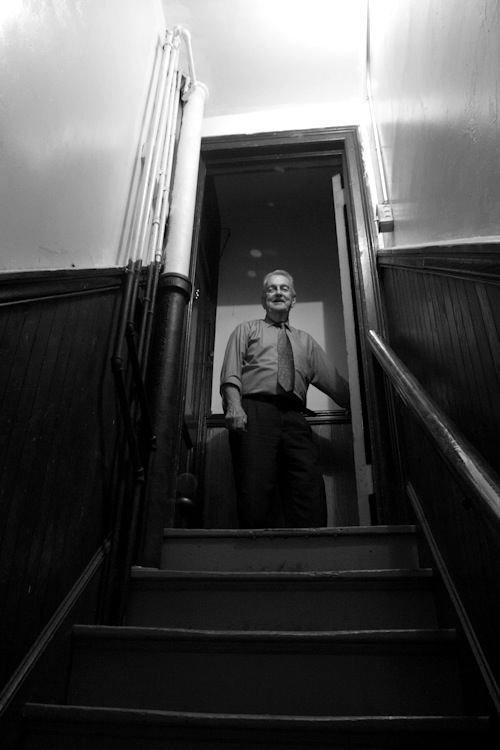 Kidding. The tour continued in the rector’s office, and its century-plus-worth of church vestments, as well as the old safe with a one-way door in the top to deposit collections, and the censers and hardware used to burn all that incense. 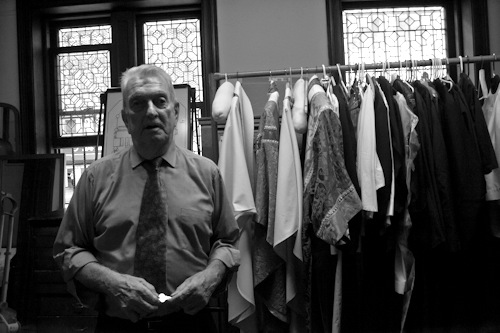 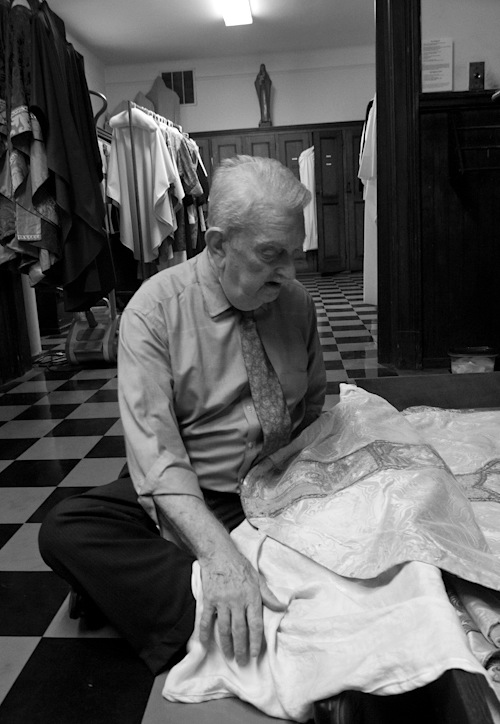 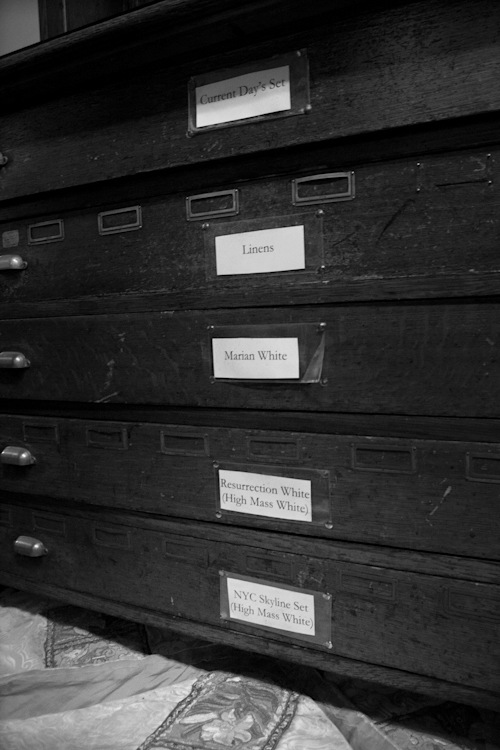 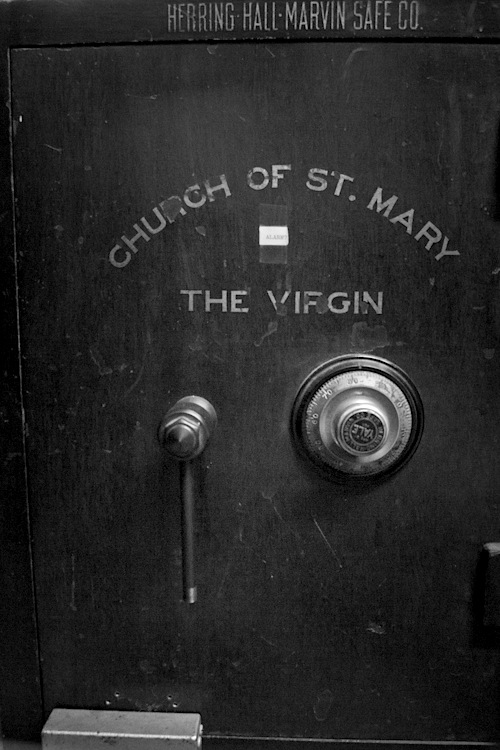 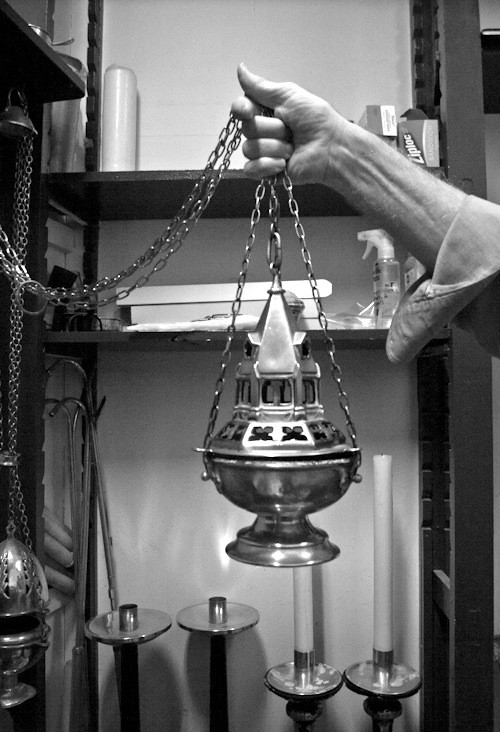 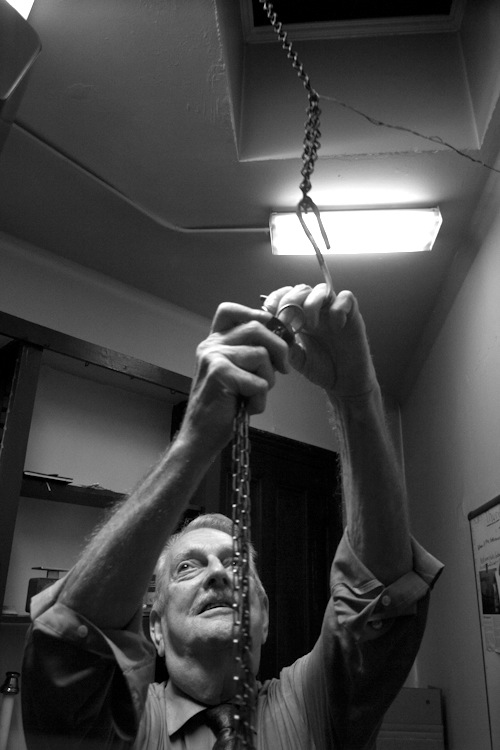 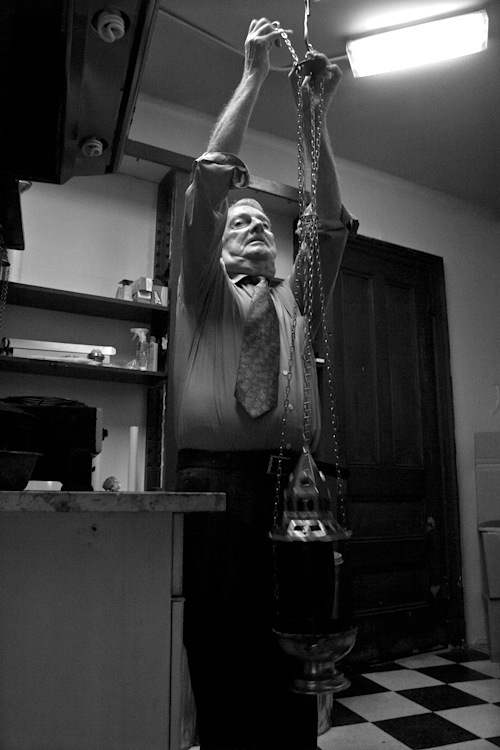 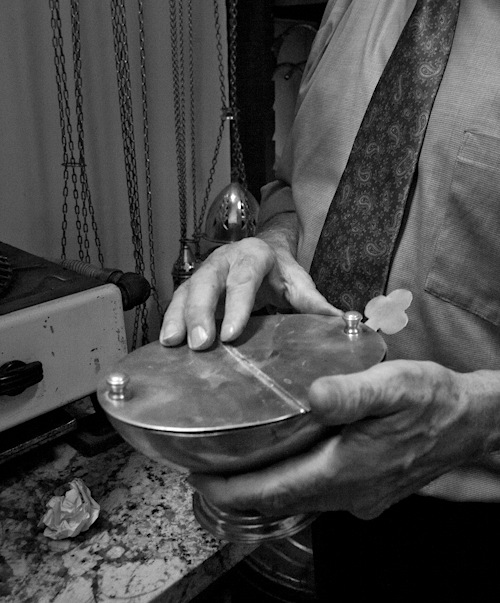 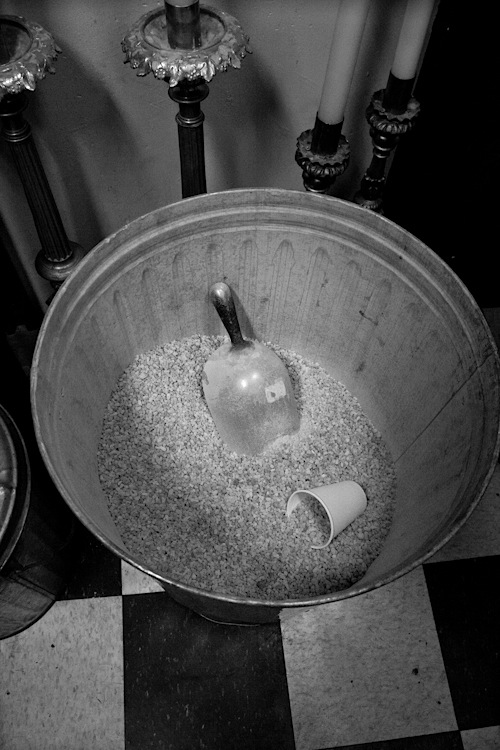 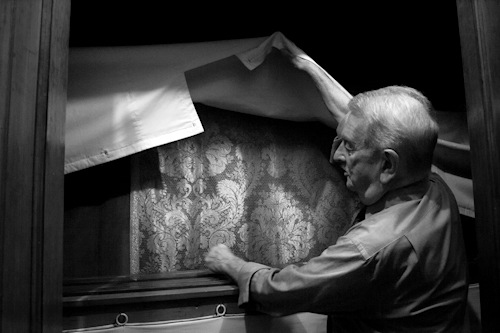 I love anything special-made. The fancy-fancy cross has a nook built right into the wall for it. 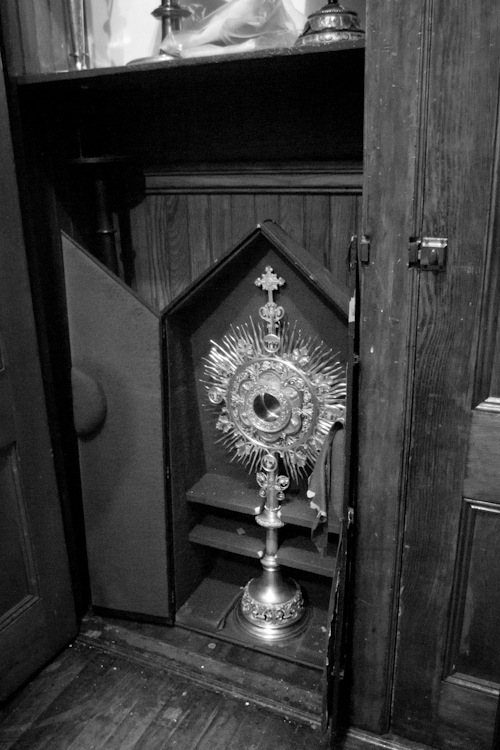 And here’s another that looks like Flash Gordon’s microphone. 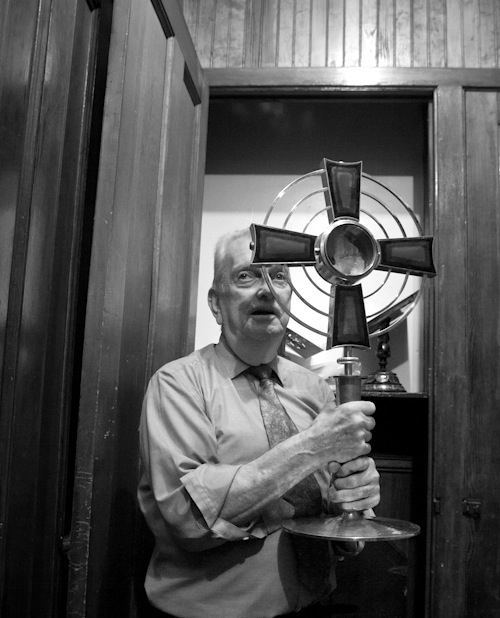 But one of my favorite discoveries was this. 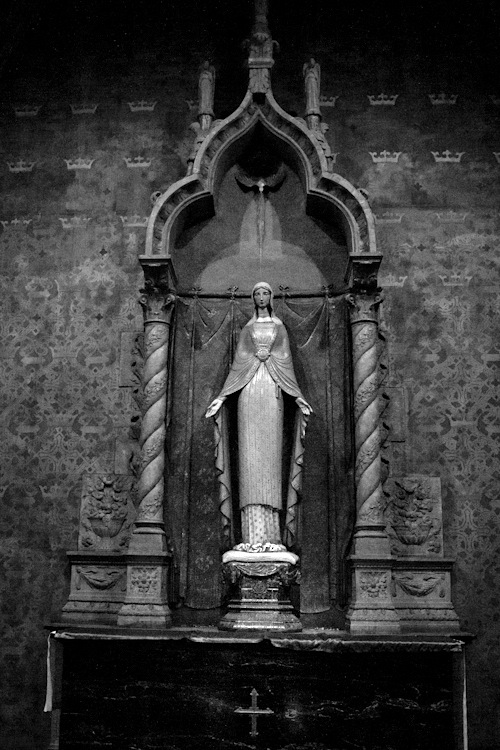 This Virgin Mary presides over the side chapel—which, by the way, pushes the already amazing depth trick of the interior into the territory of the eerie. For whatever reasons, this statue strikes me as a perfect thing. When I stopped to figure out how, Dick was quietly waiting for it. “Lee Lawrie,” he said. It’s the guy who did this: 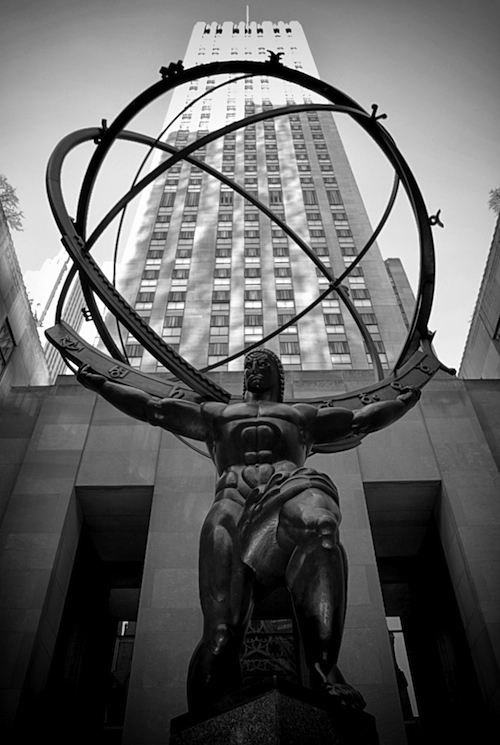