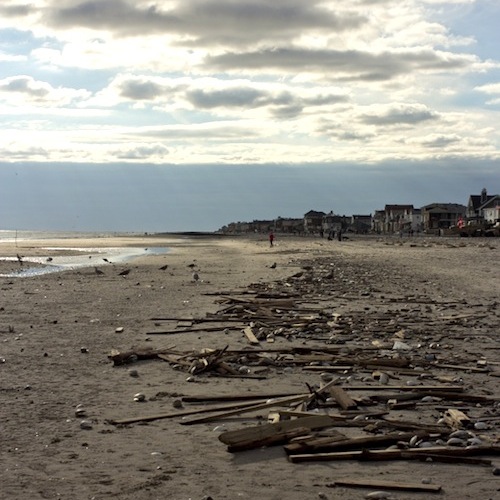 Here’s what Rockaway looked like a couple of days ago. That’s just the wild beach: the neighborhoods were a good deal worse. It was a sad chance, if you needed one, to see sidewalks heaped with destroyed furniture, hundreds of dead cars, and boats in the streets. I wasn’t looking for an upside to all this: I was busy feeling lucky that I’d personally had it easy, disaster-wise. But I learned to respect the storm in a different way. She sluiced a shitload of water, but she also coughed up a few treasures from the dark sea. Among them, fossils. Real, true, New York City fossils. 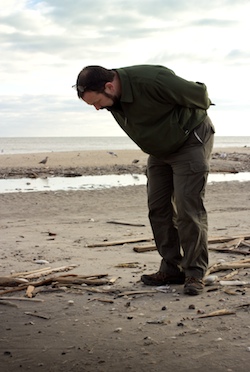 I learned that such a thing exists from Carl Mehling. Mehling, as noted elsewhere, works in the Paleontology Division at the American Museum of Natural History, and is almost certainly the only person to have found fossils in all five New York City boroughs. His secret: he’s insane. He really wants more than anything to find mineralized dead things, and he doesn’t take but-this-is-a-metropolis for an answer. I asked him what’s the best you could hope for from a stormed-over shoreline, and he made a sort of voluptuous moo: “Oooooh,” he said, “a crab. There are these crabs embedded in the sandstone with their claws folded up and you can see every little detail...Ghaah!”

Five days after Sandy howled over the city, Mehling and I drove out to Rockaway to deliver a bagful of flashlights to the boardwalk area, and swung by the beach to see what remnants of the deep past were strewn among the labyrinths of litter. Here’s what happened: It’s instructive, to say the least, to have a paleontologist along. Mehling crunches over the same debris you do, but he sees it differently. The best thing I learned is that beaches may be, at any one time, secretly teeming with fossils.

“They’re Pleistocene marine fossils,” Mehling says, “so it’s a lot of the same species that live there today, but they’re clearly fossils because they’ve been preserved in nodules of stone. They range in age from about 12,000 to 7,000 years old—the older ones in that group are the ones that would really be considered fossils.” (Mehling draws the line for considered reasons at 10,000 years.) But when chunks of fossil-bearing rock get washed onto the beach, Mehling says, “all that stone weathers away and it just looks like a seashell. So a huge amount of the shells on the beach are probably fossil shells, but you wouldn’t be able to tell unless you did some expensive analysis on it.”

If you feel a little blown away by this fact—that when you lay out your beach towel, you’re surrounded by the remains of creatures that lived before humans had cities, or writing—read more here.