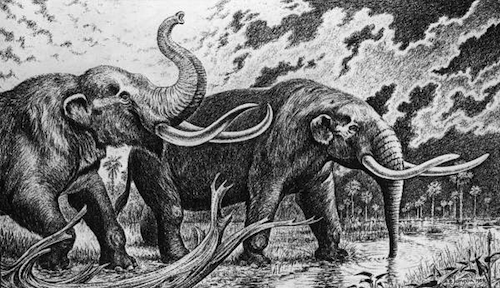 Mastodons, the woolly mammoths of North America, lived on Manhattan for millions of years. It’s possible to bore into Gotham earth and strike ancient bone (see below), but there are indirect ways to infer the presence of the vanished giants.

In the book I cover the odd and lonely Kentucky coffee trees of Central Park: they produce seed pods filled with poisonous green goop. For a long time biologists wondered why this tree went to the trouble to make fruit that no earthly animal can eat without falling down dead—when eventually someone remembered that much bigger animals once grazed the land.

Here’s another angle on the same theory. You may have noticed certain New York City trees armed with enormous thorns. It’s the honey locust. Here’s one in Riverside Park that has a particularly crazy, nasty beard of spikes that says: “Be my guest, stupid.” 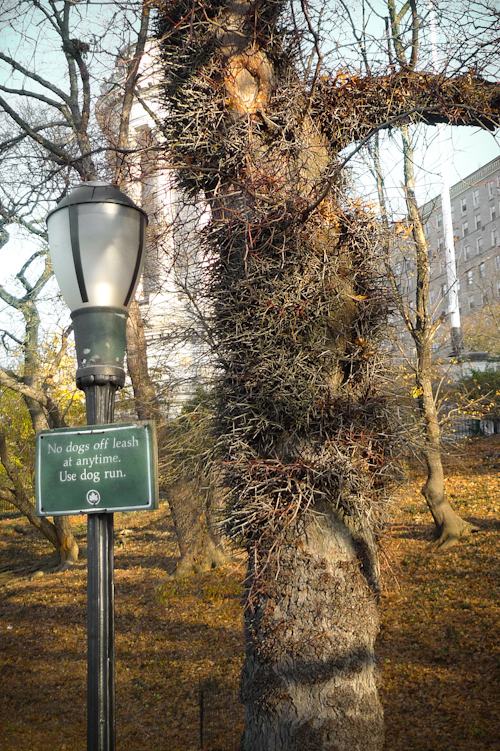 This defensive measure may have been aimed at mastodons, who were likely (in the style of today’s elephants) enthusiastic bark-strippers.

As for actual mastodon bones, the last time anybody dug some up on Manhattan was a group of workmen in 1925. Still worth trying, though. Click the headline if you want the full story of drama and debauch; for instance the milkman who stole one of the prehistoric teeth, saying, “I want this for Hazel. It’ll be a corking thing for the whatnot.” Indeed. 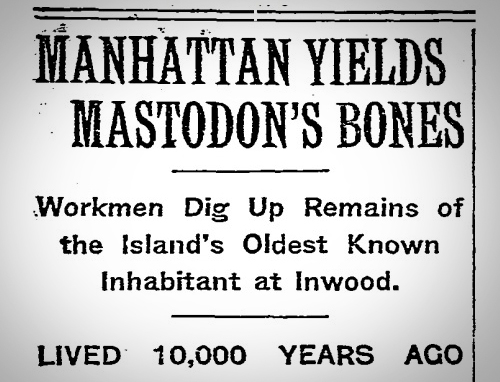 The milkman wasn’t alone: out of fourteen loose teeth, just one eventually made it to the Museum of Natural History. In the museum collections they have a full jawbone from the same site; the tag mentions the thievery, with the note: “two molars were recovered after a plea for their return was issued.”

You know what that means. Eleven Manhattan mastodon teeth are still out there: on mantlepieces and bookshelves, in cellars and attics...